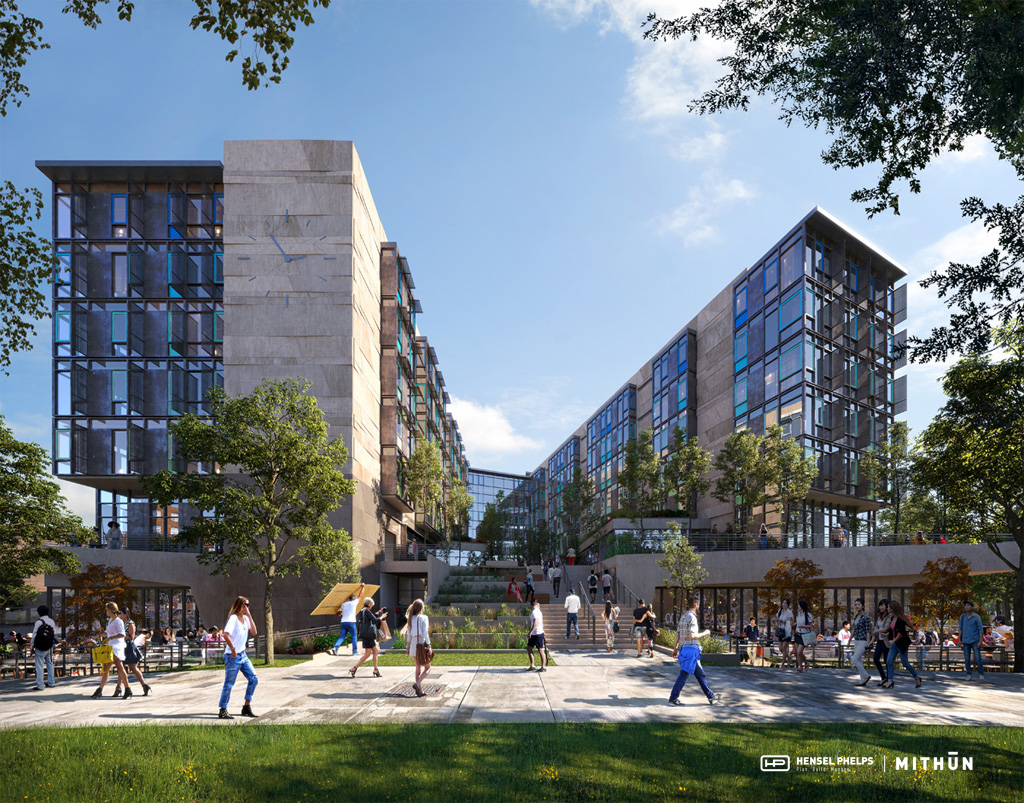 The University of California, Irvine (UCI) awarded the second phase of their campus undergraduate student housing program to the design-build team of Hensel Phelps and Mithun in early April. The 215,000-SF UCI Middle Earth Expansion project consists of two phases: (1) a new student housing building on the site of two buildings to be demolished (Brandywine Commons and Brandywine Student Center) and (2) the renovation of Pippin Commons. The new project will house roughly 494 students and include a new dining facility, along with amenity and classroom spaces.

This design-build collaboration between Hensel Phelps and Mithun builds on the team’s 2016 success at UCI with the completion of Mesa Court Towers, another freshman student housing project on campus. Having designed more than 3,400 units of student housing through a design-build partnership, the Hensel Phelps | Mithun team has accrued an invaluable body of knowledge through a tested and successful track record of collaboration that benefits the project, the university and students. The team’s collaborations also include Mesa Nueva and Nuevo West graduate student housing for the University of California, San Diego (UC San Diego).

“We’re very pleased with the selection of the design-build team of Hensel Phelps | Mithun as our partners to deliver the Middle Earth Expansion here at UCI. With increasing numbers of students living on campus, I believe this team will build on the successful delivery of the Mesa Court Towers and provide state-of-the-art facilities that provide a true welcoming living-learning community for some of the brightest minds on campus,” said Assistant Vice Chancellor/Campus Architect Brian Pratt, AIA, LEED AP.

“The beauty in the design-build delivery method is the flexibility of choosing the right team for the right clients. UCI is a big proponent of design-build and embraces the team collaborative atmosphere. Through this delivery method we will be able to control budget and schedule,” explained Hensel Phelps operations manager Vitas Rugienius.

According to Bill LaPatra, partner at Mithun, “The design-build partnership of Hensel Phelps and Mithun is built on mutual respect for each other’s expertise, solidified by a deep-rooted collaborative spirit that begins on day one and continues through ribbon cutting. This chemistry allows debate, options and decisions to be fully vetted, revolving around what is best for the project and the client.”

The project’s design is influenced by local ecology and landscape. Two five-story residential towers emerge from a two-story podium base that echoes the natural form of the surrounding region’s limestone canyons. A “Link Lounge” contains space for socializing, media viewing, group kitchen activities and laundry facilities. Outside, entries to classroom and amenity spaces are located at the courtyard level. The project will have a dining facility with the capacity to serve 7,300 meals per day.

“Our new project addition to the Middle Earth community has the rare opportunity to create a new living and learning heart in this neighborhood for first-year students. The rich mixture of academic, residential and dining spaces promises to be one of the most popular places on campus to build community,” says Elizabeth MacPherson, lead interior designer from Mithun.

The Middle Earth Expansion is designed to help the UCI campus achieve its goal of carbon neutrality by 2025. The building and site are designed to achieve LEED Platinum Certification, reduce energy consumption, minimize its carbon footprint and operate at net-zero greenhouse gas emissions. Sustainable strategies include rooftop solar heat collectors to reduce the amount of energy needed for hot water and photovoltaics that will generate 50 kW KVA of renewable energy.