Hensel Phelps Development acted as co-developer and owner alongside Peter N.G. Schwartz Management Co. with Canyon Partners as co-financier for the Ascend Apollo residential complex in Largo, Maryland. Hensel Phelps Construction executed the build of the three interconnected buildings, representing the first phase of a larger development of multi-family units, parking and retail adjacent to WMATA Metro. Ascend Apollo consists of a 424-unit mid-rise building totaling 461,044 square feet, with three interior courtyards and a six-level structured parking garage. The courtyards include a pool, bocce court and a landscaped plaza. The building also features a fitness facility, game room, club room, a business center with conference room, dog spa and an area on the ground floor to accommodate future retail tenants.

“I know it has been a tremendous effort and that everyone is working very hard. It is not going unnoticed… I have confidence that your team will succeed.”

Competing Scopes Collide in a Race to the Finish Line

On this fast-paced development project, the schedule required that the first building in the complex, featuring the interior courtyard which houses the 1,850-square-foot pool, be turned over for temporary occupancy in the fall of 2016. With several activities running concurrently to meet the fast-track schedule, this meant that the Hensel Phelps team needed to dig and construct the pool at the same time as they were installing the building’s complex multi-system skin and floor-to-ceiling windows in the courtyard.

In order to complete the entire scope of work in time, the team ran multiple crews concurrently in a carefully orchestrated staging plan. The exterior finish work in the courtyard had to be performed on boom lifts and the navigable space for theses lifts became very narrow, due to the digging of the pool. The team proceeded to install the skin system which included four different exterior finishes and the architectural details and joints required extensive coordination to ensure a timely, high quality installation. Safety was a key focus for the team as this complex skin work was going on literally above the pool work. To accommodate additional lay down area, two ground floor units were left unfinished until roughly two weeks before building turnover, and were then finished on a highly accelerated schedule. 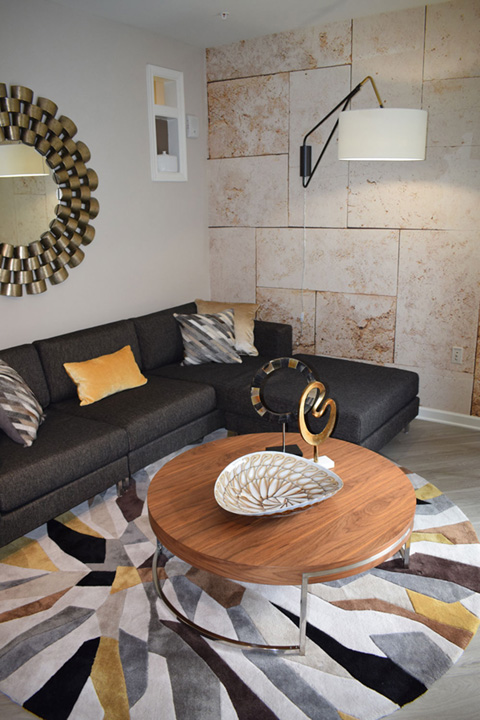 Delivering on the Promise of Quality

As the Apollo Ascend project included oversight from both Hensel Phelps’ Development and Construction, the high quality expectations were established from the outset of the project. This continuity of service helped deliver this project on a tight schedule while meeting the high expectations of the client. The pool and courtyard work was finished in time to remove the lifts, finish the remaining apartments, and meet the client’s needs for its opening date.