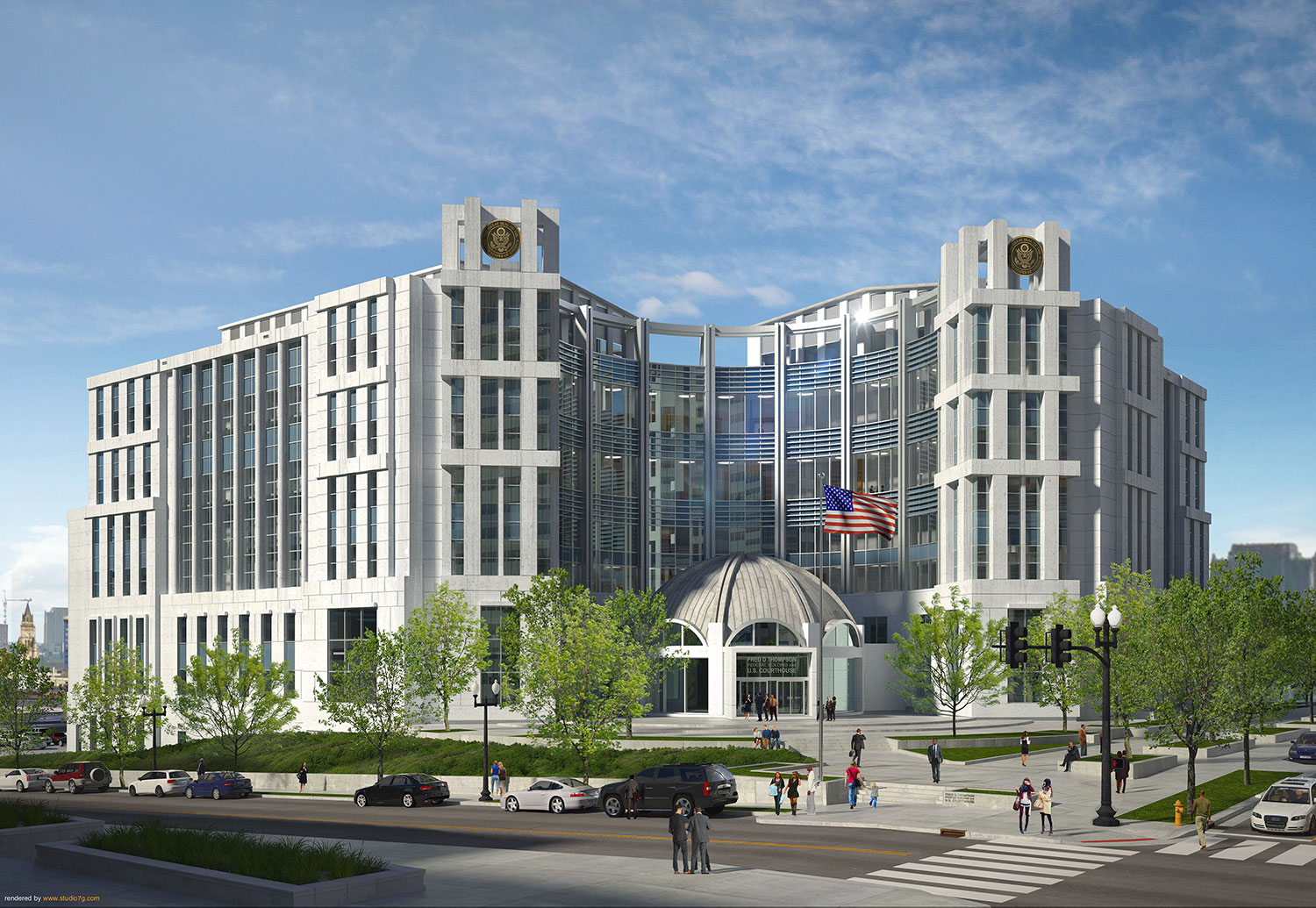 The site is bounded by Seventh Avenue North and Rosa Parks Boulevard (formerly 8th Avenue North) Avenues to the east and west and by Church and Commerce Streets to the north and south. The site occupies the entire block, except for the historically-listed Berger Building at the southwest corner.

At the height of its development, Church Street was a bustling shopping and institutional area characterized by quality buildings. During the 1960s and 70s, many of these buildings were removed in favor of surface parking. Extensive revitalization along Church Street has reinforced its role as a major downtown avenue. A new streetscape and a return to two-way traffic are among the recent changes resulting from redevelopment that began during the 1990s and continues today at a rapid pace. Much of the traffic to the courthouse from surrounding law firms is from offices to the northeast of the site, which is Nashville’s institutional and business center. Public transit lines also converge one block north of the site.

The Fred D. Thompson U.S. Courthouse and Federal Building is targeted to meet USGBC LEED Gold and SITES Silver certification. SITES is a sustainability-focused framework that ushers architects, engineers and constructors toward practices that protect ecosystems and enhance the benefits they provide to our communities. By providing performance measures rather than prescribing practices, SITES supports the unique conditions of each site, encouraging project teams to be flexible and creative as they develop beautiful, functional and regenerative landscapes. Hensel Phelps has participated in the SITES program since its establishment. The Benjamin P. Grogan and Jerry L. Dove Federal Office Building was involved in the SITES pilot program during its beginning stages and it became the first project in Florida to participate, and be certified, in the new sustainable program.

Below are some sustainable practices for civil and landscape design that are being implemented for the SITES program on the Fred D. Thompson U.S. Courthouse and Federal Building. 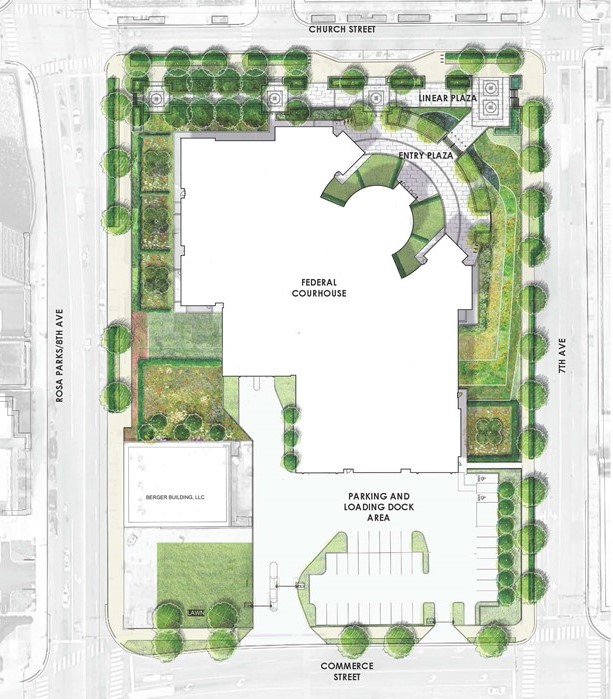 Entrance Plaza:
The orientation of the main entrance and plaza is towards the corner of Church St. and 7th Ave N. This orientation creates a line of sight from an active intersection that strengthens the importance of the courthouse within the urban grid. The design of the entry plaza is very symmetrical and classical in its design form. Low retaining walls and terraces will reinforce the formal design of the plaza, as well as offer seating and gathering areas for the public. Trees will be planted at the edge of the plaza, framing the space. These trees will provide shade for the users of the courthouse and the adjacent buildings. Pavements for the entry plaza will be cut stone pavers.

The courthouse entry plaza is designed to be a welcoming public amenity. The plaza will have a variety of native plantings, shaded areas, and areas of seating. The diagonal entry to the plaza from the corner of Church and Seventh Avenue North reinforces the diagonal orientation of the entry rotunda and curved primary building circulation spine. To further connect the courthouse plaza to its surroundings, the linear portion of the plaza that runs along Church Street is on axis with a small plaza at the corner of the Nashville Public Library. There will be a passenger drop-off along Church Street that will also be the accessible entry to the plaza. Given the redevelopment trend along Church Street, the landscaped plaza acts both as a buffer from the street traffic as well as an area of respite. 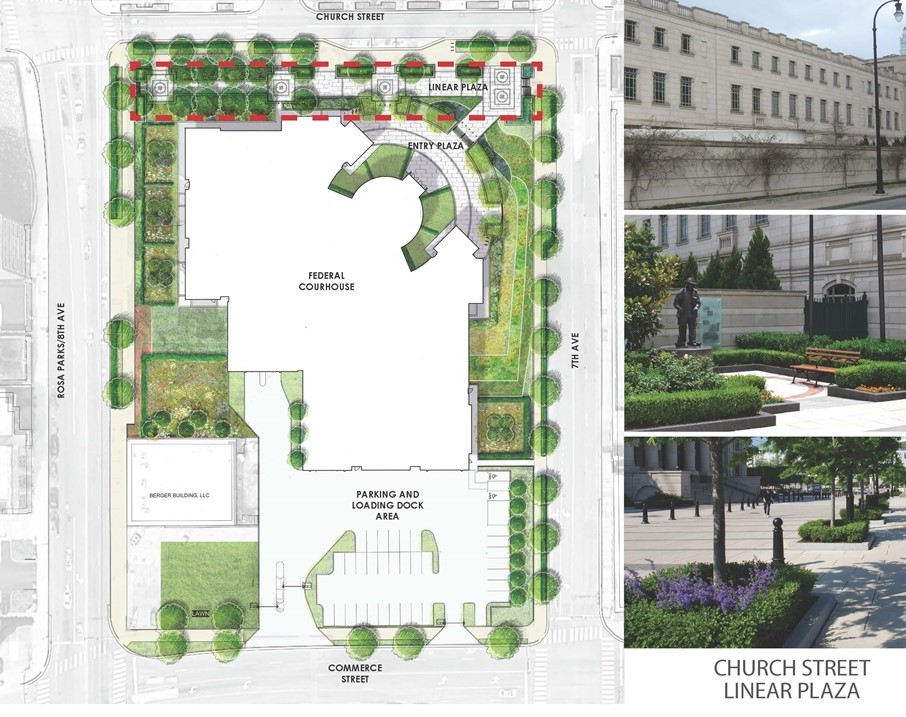 A linear plaza is located all along the Church St. frontage that builds upon the existing plaza at the library across 7th Ave N. This plaza gathers pedestrian traffic from Church St. at various points along its length. It features nodes along its length that reinforce the classical form of the site design and provide places for people to sit and activate the space. This plaza reinforces the Church St. streetscape, and will add a much welcome urban park to the city’s downtown. A raised planter wall, a minimum of 18-inch height, at the outer edge of the planting bed along Church Street will provide an attractive as well as functional vehicular barrier. The public street right-of-way is increased by six feet to incorporate a future bike lane.

Planting and Irrigation:
Most of the planting palette will consist of native hardy plants to minimize irrigation and maintenance requirements. On the east side of the site, native or adaptive shrub massing is proposed that requires less water and stabilizes the steep slopes. At the bottom of the slope on the east side of the site the landscape design consists of a formal evergreen hedge that will contain a native wildflower planting that is a butterfly and bee attractor. The landscape design on the west side of the site will consist of lawn. The irrigation system will be designed to be efficient, inconspicuous and will minimize overspray onto pavement areas.

Landscape Maintenance:
Plant selection for the site will be based on low maintenance requirements. Native groundcovers will need to be cut back once a year in early spring. Once established the plants will require little maintenance other than keeping all planting areas neat, weeded and uniformly mulched on a continuous basis.

Hensel Phelps would like to engage the local community in a survey to identify needs and develop options for the economic and social benefits of the Fred D. Thompson U.S. Courthouse and Federal Building site. Click here to take the survey.