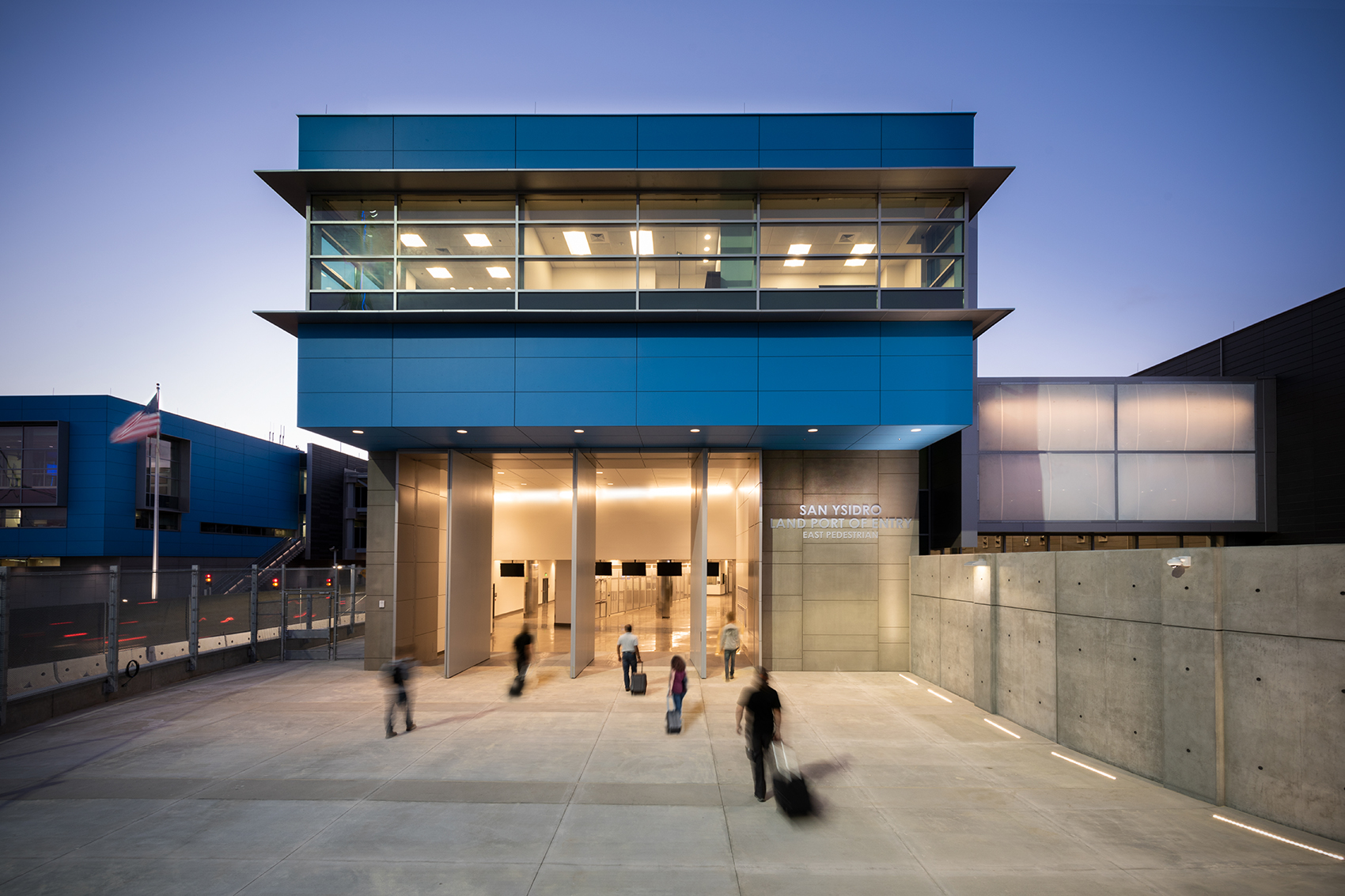 The project included the complete reconfiguration and expansion of the port, including primary and secondary inspection areas, administration and pedestrian buildings, and all other support structures. The project expanded pedestrian processing facilities, including a new pedestrian crossing on the east side of the LPOE that connects with a new multimodal transportation hub in Mexico and expanded northbound inspection facilities. Additionally, there is a new bi-directional crossing at El Chaparral/Virginia Avenue with an associated transit center.

The design-build team of Hensel Phelps and Stantec completed Phase II of the three-phase GSA expansion and renovation project, delivering a complete reconstruction of the LPOE’s pedestrian- and bus-inspection facilities, which included inspection booths for 18 northbound pedestrian-processing lanes and four northbound bus-processing lanes. The design achieved LEED Platinum certification and stringent energy-reduction targets to be a transformational project which enhances CBP’s and other federal agencies’ ability to conduct their respective missions. Key project components include:

Stantec completed the lighting design on all three phases of the LPOE expansion, ensuring the facility could operate 24 hours a day, seven days a week, and 365 days a year while minimizing glare and making the facility as efficient and safe as possible.

“It’s exciting to reach the completion of the three-phase expansion of the busiest land border crossing in the Western Hemisphere,” said Bill Ferris, Stantec’s Project Director. “This is a project that will make a tangible difference in the lives of the traveling public and one that we are humbled to have played a part in helping to deliver.”

“This event marks the culmination of nearly a decades-long relationship with GSA and CBP. Along with Stantec and our Trade Partners, we were able to deliver a world-class facility that focuses on efficiency, security, and safety for the thousands of people crossing the border every day,” said Brian Maximuk, Project Manager at Hensel Phelps. “It has been an honor working with the men and women of GSA and CBP to provide a facility that not only meets today’s needs but will adapt to future needs and changes as they arise. This is truly the Port of the Future, and Hensel Phelps is very proud to have played a part in making this a reality.”

“We are thrilled to celebrate the opening of the expanded San Ysidro Land Port of Entry,” said Arun Kaiwar, Stantec’s design leader. “Not only is the Port and its function deeply a part of the rhythms of San Ysidro; it is one of the city’s major civic structures. With the ability to efficiently and securely process cross-border travel between the United States and Mexico, this is a transformational project that will improve and enhance one of the world’s busiest border communities.”