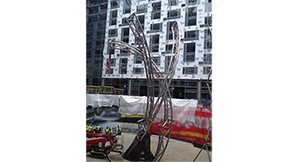 HENSEL PHELPS Marriott Marquis Hotel project in Washington D.C. has reached another milestone—on July 31st the structural legs of an iconic sculpture were placed into the hotel’s 30,000 SF atrium. The 57’ polished stainless steel sculpture was designed to represent fireworks and the uniting of the elements of “Old Glory” – “The Birth of the American Flag”. The three flag elements in the top of the sculpture are comprised of thirteen stripes, which represent thirteen colonies becoming thirteen States. The stripes are waving in the wind just before bonding together to unite as on Nation. Supporting the flag elements are arching beams as celebrating fireworks cheering on this Union”