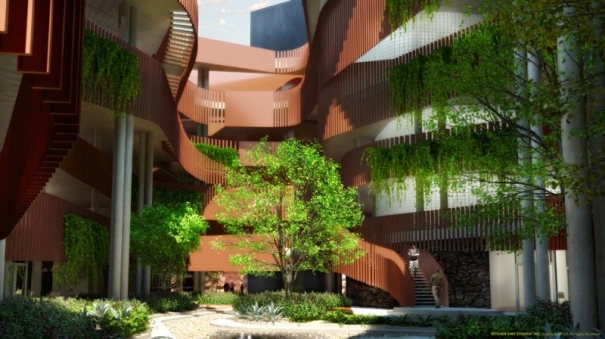 The Hensel Phelps ENR2 project is a classroom and office building at the University of Arizona in Tucson. This unique building consists of five stories and a conference room on the roof level. The structure is cast in place exposed concrete that sits on 92 drilled piers up to 85 feet deep. The exterior of the building is primarily storefront windows screened by steel fins of varying lengths, mounted vertically to the edge of the concrete decks.

The building is pending LEED Platinum certification. Several key elements include a water harvesting tank that collects and distributes water to the landscape area on all five levels; offices cooled with chilled beams; open spaces cooled via FCU and ducted under the floor to optimize energy use; lights combining LEDs and fluorescents; and water usage kept to a minimum via waterless urinals and dual flush toilets.

After two years of construction, from its beginnings as a parking lot in June 2013, there now stands an exciting and very efficient classroom and office building.